What is Wi-Fi 6 and how can it help your business evolve?

There have been some changes in the world of wireless connectivity in the last few years. Since 2014, the vast majority of new internet-connected devices have operated on a wireless protocol named 802.11ac, or in simpler terms, 'Wi-Fi 5'. But ever since late 2019, some changes have been made and new devices are rolling off the production line with 'Wi-Fi 6', the bigger and better variant. Zebra Technologies, the leading manufacturer of enterprise mobility hardware and software introduced its first Wi-Fi 6 enabled mobile computer TC52ax late last year. Read the Zebra Press Release

So, what changes does generation 6 bring?

Let's explore how each of these can help you utilize Enterprise Mobility solutions to improve efficiency in your business. 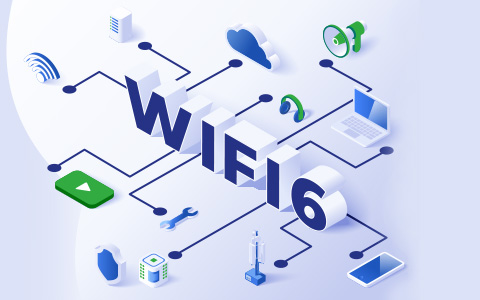 MU-MIMO already exists within the Wi-Fi 5 protocol but has had some fundamental upgrades with generation 6. This technology allows your router to connect and communicate with multiple devices at one time, sending data back and forth in parallel, instead of one device at a time. With Wi-Fi 5 MU-MIMO, you can communicate with up to 4 devices at one time, whereas with Wi-Fi 6 this is doubled to 8, allowing you to significantly scale large network use cases with less concern about network slowdown.

Using WiFi 5, the 'theoretical' maximum speed of a given network was 3.5 Gbps. This is theoretical because it would require being hardwired into that network, there to be no other devices connected and no other interference between you and the internet. With WiFi 6, this theoretical maximum speed is more than doubled to 9.6Gbps. The same constraints do apply with regards to actually achieving that speed, however, in combination with the two previously mentioned flagship technologies in this protocol, overall network performance, efficiency, and capability should see significant increases.

Basic Service Set Colouring allows a Wi-Fi 6 enabled router to detect other routers within the vicinity, and 'mark' them as a different colour to itself, allowing for less interference with surrounding networks. Target Wake Time is another new technology introduced in this protocol, aimed at improving battery life for devices connected to the network. The router will communicate with the device and establish set 'wake' times for the device to turn on, send out & receive data packets, and search for other signals. This allows the device to power down its antenna between these 'wake' times and conserves battery life over time.

Addition of the 6GHz frequency band

The final headline of the Wi-Fi 6 protocol upgrade is the addition of the 6GHz frequency band, alongside 2.4GHz and 5GHz which have been around for a while now. Different frequency bands have different uses, for example, 5GHz is technically ‘faster’ for data transfer, but 2.4GHz can travel further. The primary advantage with the addition of 6GHz, over when the 5GHz band was added, is the width of the spectrum. 6GHz has space for 4x as many sub-frequency bands as either of the other two. Additionally, the usage of 2.4GHz and 5GHz is licensed, as well as utilized by things like mobile networks, whereas 6GHz has until recently been locked away from the general public or consumer usage. While 6GHz is unlicensed and therefore easy to incorporate into current infrastructures, it will likely take consumers and businesses some time to begin using it in earnest, meaning it will have considerable free capacity in the near term.

WiFi 6 is not a complete overhaul of the wireless communications protocol we’ve all been using for many years now, but more a refresh and streamline to make more efficient use of new technologies that have emerged since Wi-Fi 5. The trident of MU-MIMO upgrades, OFDMA, and substantial network maximum speed improvements will almost certainly result in a tangible day to day boost in network & business performance that seems more than the sum of its individual parts. There are more internet-connected devices than ever, in public, in offices & workplaces, and in homes. Utilizing Wi-Fi 6’s key features will allow any technology-based business to better thrive in the digital world and provide faster, more reliable services to its customers. Find out more about Multiplexx Services.