El Salvador and its president, Nayib Bukele, have made headlines around the world numerous times in the past 12-18 months, with radical plans and announcements for the direction of El Salvador and its economy. Bukele lead the way in granting Bitcoin legal tender status in El Salvador in September of 2021, the first country in the world to do so, followed by announcing plans in November of that year to issue 1 billion dollars' worth of bonds, backed by Bitcoin, to fund his ‘Bitcoin city’ dream.

How is this ambitious project being delivered?

Blockchain technology firm Blockstream will be managing the $1b bond issuance, denominated in US Dollars, which will happen on the ‘Liquid Network’, a Bitcoin sidechain. The bonds will pay an annual interest return of 6.5%, with a maturity period of 10 years, set to end in January of 2032. The allocation of these bonds will be split 50/50, with $500m going to fund energy and mining infrastructure in this ‘Bitcoin city’, and the other $500m being invested directly into Bitcoin assets for the country’s treasury to hold. Bukele plans to build this city in the Gulf of Fonseca, a South-Eastern region of El Salvador, near the Conchagua volcano. This spot has been selected specifically as the city is proposed to run on geothermal energy, emitting zero carbon dioxide emissions, according to Bukele. This location is also what has given the bonds due to be issued their nickname; ‘Volcano Bonds’.

Bukele has stated that he sees the construction of this Bitcoin city as a beacon, akin to Alexander the Great founding Alexandria in the ancient world;

“The idea behind it was that these Alexandrias be the beacons of hope for the rest of the world; that all of the world could be like that… so I thought, if you want Bitcoin to spread all over the world, we should build some Alexandrias.”

The president has also promised no income tax, capital gains tax, property tax, payroll tax, or municipal taxes in the Bitcoin city. The only charge will be a 10% Value-added Tax (VAT), to be split between paying off the bonds, and investing in municipal works within the city.

Should you visit one day?

As for details about how the city will look and feel, Bukele has shared some of his vision for that too. The city will be built in the shape of a circular coin, likely inspired by the logo of Bitcoin itself, and will include residential areas, commercial areas, services, museums, entertainment bars, restaurants, airport, port, rail, and much more. Construction is set to begin 60 days after the bond offering, slated for late Q1/early Q2 2022, but the date has yet to be confirmed. 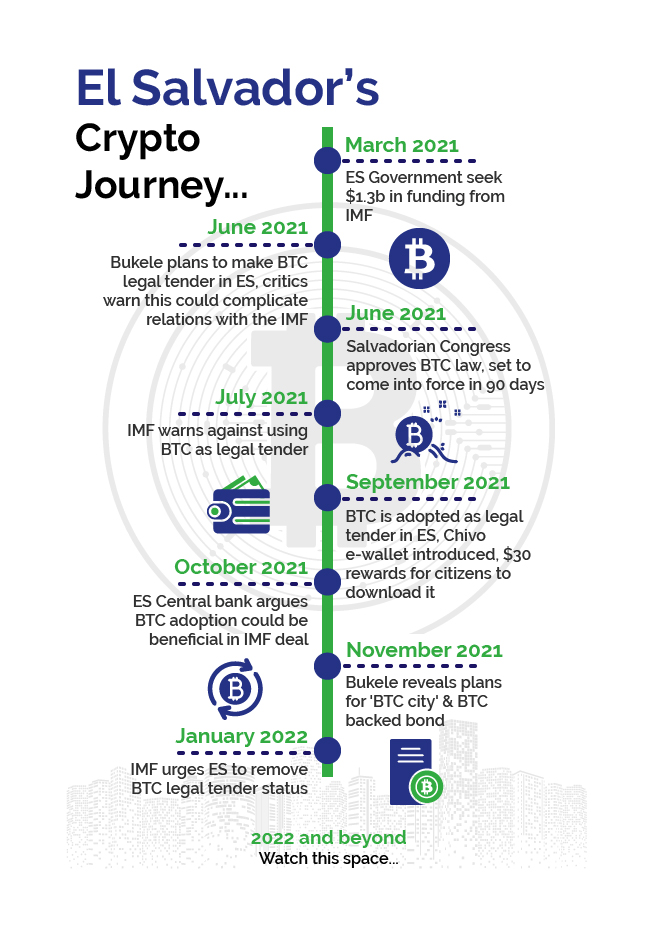 Most recently, there have been rumours of a broad selection of new laws Bukele’s government is preparing to put through Salvadorian congress, which could accommodate owners of Bitcoin having a path towards obtaining citizenship in El Salvador, allowing them to settle in the country should they want to.